With the book launch event thankfully behind me, I had to go find my room. My room was in a different hotel than the convention. Why? I'm che- FRUGAL. Gotta say though, I KIND of felt like a chump abandoning the hotel hosting the convention, in favor of a nearby competitor. Oh well.

I had a large bin that I'd been hauling around since the close of the vendor room. A masterpiece of rubbermaidery, when it sat in my lap, it came up to my chin. No one asked what it was. I learnt from Dr. Who: (paraphrased)

"What do people do when they're walking along and see a big blue box sitting in the middle of the street? They keep walking." 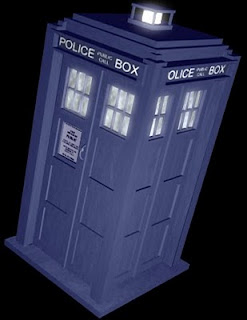 And my box was no where near as big, nor time-travelly. It was, however, filled with paraplegic overnight stuffies. And it needed to go for a walk. A ride. In my lap, down the street, across it, and to my destination hotel. It was not super stable in my lap, and I needed to pull it back into place regularly, especially when there's any little abnormality in the terrain.

The trip looked like five blocks or so on a map. No biggie. I wheel more than that around town taking kiddo to the gym/preschool, whatever. When I used googlemap's street view (also useful for checking out flatness of terrain) it looked like two or three blocks.

When it came to actually making the trip, I got to the corner of the convention hotel's property, and poof. There was my destination practically across the street. 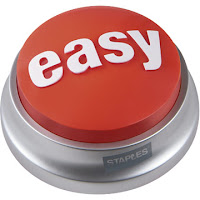 Though I still had to cross. I hit the button to get the signal, and waited my turn, then off I went. I had to adjust the bin a lot. Off the sidewalk cutout, onto the street, rushing to get out of the way, and now I needed both hands to 'jump' safely onto my target cutout. Just an inch or so of wheelie to make sure my front wheels decide to continue forward, as opposed to stopping hard, and dumping me out. I stayed in my chair; it was a little jump that was easier than most. The bin disagreed.

Time slowed a little as I watched it teeter, unable to get a hand safely up to it in time. I had time to know that the bin was going to go over, and judge where it was going to land. I had time to imagine all of the contents spilling out. There was no drain or anything nearby to claim my things, and I easily accepted that I'd be spending some time picking my things up and putting them back in the bin.

Huh. Everything else stayed in. Well. That was anti-climactic. 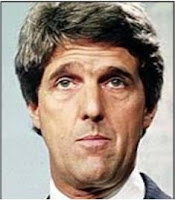 After check-in, I headed to my room on the ground floor. No elevator ride? Aww. Once I got in there, I did a little inspection for my needs. Bathroom was a little smaller than I would ideally want, but it beat the snot out of a lot of 'accessible' rooms I've seen elsewhere. The bed was a tad high, but no big deal. And yup, there was a Gideon Bible there. But who wants religious advice from this guy? 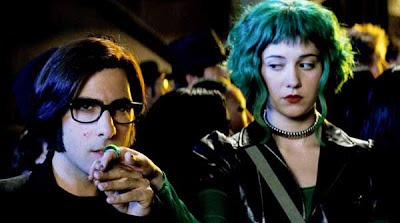 Seriously. What a douche. BTW, I so want the Scott Pilgrim DVD/Blueray to come out.. thought I'd like to watch it on a big... 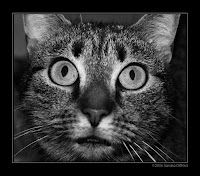 The cheap hotel room has a bigger TV than me! A lot bigger! Wh.. I.. No! Hotels are supposed to have crappy little TVs that barely work.

First thing's first. There's a few people I have to call. Paranoid people, some or which thought that the epic journey in the dead of night (uh.. 10 pm?) in this seedy neighborhood, (seriously, you could have figuratively eaten off of that neighborhood) would be too dangerous for widdle ole' me. Rang my mum first, then my dad, who had been calling my cell (which I can never hear ringing, especially not in a crowded room), then my wife.

She had been taking calls from my dad, who .. I don't know, was calling around to see if my body had been found yet. My wife had a new issue for me to worry about, concerning my tenant. (long story, I might blog it after I'm done the VCON stuff, it's kinda funny. Kinda. In a sad way.)

Alright, enough phone calls. Oh, by the way, I couldn't get a call out of the room. Dialed 9 and all that crap, but I just kept getting an odd busy signal for everything. Thankfully, I had my cell.

I unpacked my bin of overnight stuff. My teddy bear, my ipod loaded with David Hasslehoff music, and my inflatable sex doll. Or not. My 'rations' were in there too. A box of granola bars that I wasn't in the mood for. There was a vending machine in the hall less than 10 feet from my door, so I summoned up the loose change I had, (I wasn't dealing in coins in the vendor table) and got a chocolate bar and sunchips.

I eat very little during a VCON.. roughly a meal's worth of food, snacky bit at a time, and energy drinks. As if I wasn't hyper enough already at VCON. I got my findings, and went back to my room. Hey, was it chilly in here?

I flipped on the TV. Stargate:Universe was just coming on. Aw, piss. I really should do my gimp-stuff and get that over with. No biggie. At that moment, my PVR was waking up at home, nabbing it for me. I didn't have PVR last year and I managed to catch a rerun later anyway.

I wasn't in the mood to enjoy the show now anyway. Between the lackluster friday sales, the belly-drop of a book launch, and the news of my tenant being an extra pain... well, at this point, being here at VCON didn't feel like a good idea. Sales wise, it wasn't worse than any other VCON friday. I knew that. And the book launch event wasn't really a selling point anyway. But I wanted to do my reading. But tomorrow is the big day. And I have a reading sunday anyway. Still.... the logic didn't help my mood much.

By the time I got my gimp-stuff done, I'd forgotten about Stargate. No sense tuning in part-way anyway. I double checked that I had everything I needed for bed.

Aw piss. I brought my favorite sport bottle for water, and left it in the dealer's room. The coffee table in the room had paper cups.. too small for my tastes, and I didn't feel like having a row of cups of water on the nightstand. So I filled up the coffee pot with water, and sat that on my nightstand. Cuz that makes SO much more sense.

I got settled into bed, and got attached to what needs attaching. Set the alarm. Everything was good. Turn on that TV, and skim things to wind down before passing out. Tomorrow was going to be the busy day. 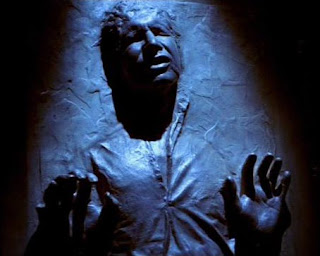 And yet, Carrie Fisher wasn't calling out for me. The air conditioner was essentially right next to the bed, and seemed to be set to "No disintegrations, Mr. Fett" mode. I kept waiting for it to turn off. It didn't. It was noisy, and freezing me. No biggie, it's a big thick blanket, and I can 'man up' until my bod warmed the blanket up.

The fridge was noisy too. Outside the door, someone came to use the vending machine about once an hour... to claim one's purchase, you had to push in a wide, heavy noisy metal door, which would then fall back into place. It was cold. It was noisy. I had no way of reaching the AC's controls despite the large unit nearly being in my lap. Disappointment in friday, as well as tenant stress was banging around in my head. It's okay, it's okay. Man up, get to sleep.

5 am or so, I passed out from sheer exhaustion. The alarm went off at 8. Yeah, this was gonna be a good day.

I got myself together, (the bin could stay for the day) and saw the cord for the AC. Now that I was rolling, I double checked that I couldn't reach the controls. I could reach the cord. Pop. Yeah, well, it'll be nicer tonight, I guess. Off to claim my free breakfast. The room off of the lobby had very little wheeling space, and a pile of people. I got in far enough to grab a little box of fruit loops, and headed out.

It was a new day, and I had 3 hours of crabby sleep. Uh huh. It was time to get to my evergydrink stash waiting for me in the dealer room. Welcome to saturday.
Posted by Joseph Picard at 8:51 PM

Dang, dude.. that all sounded seriously fun. I haven't been to a Con since BEFORE we were at college.