Let the haphazard capitalism commence! Well, I'm sure most of the vendors that show up have some semblance of professionalism, but let me tip you off, I'm not one of THOSE types.

That said, this was my fourth time at bat, and I'd seen some trends I could expect:

-Every friday is slow as hell. 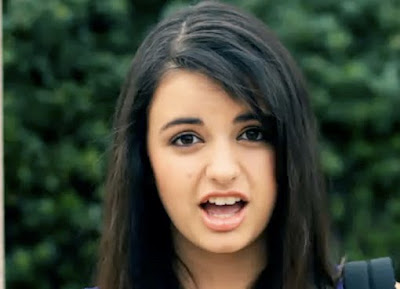 Wrong kind of friday-hell. As I was saying..

Most people don't get off work until two hours before the vendor room closes, and then they just want to do selfish things like drive home and/or eat. At the end of friday, you can spot the newbies, with a look of "OMG, what am I doing here, sales were crap, I'm wasting my time and money, I'm gonna to into the corner and cut myself."

I sagely say to such folks, "Take it easy, this was friday. Think of it as dress rehearsal. Most of the visitors will be floating around the con all weekend, and will be back. They're not in a rush to buy, they're on recon." Wisely wise, do I enwisen my wisdoms. Enwisen. It's a word. I just invented it, I'm allowed, I'm a writer.

-Every saturday is the BIG day. I'm not in it 'for the numbers', I'm in it to get my stories into people's hands primarily, but if the numbers are there, I'll keep an eye on them. And saturday is the bringer of numbers. I've heard other vendors say similar things.

-Every sunday is for the slow deciders, the 'orbiters' who orbit the con taking everything in, finally settling in to pick something up that they've had their eye on since friday. This is also when polite vendors wait to buy from other vendors, as to not deplete stock before visitors have a chance. Sunday always feels slow after saturday, but not nearly as bad as friday.

Penny Arcade has noticed many of these trends as well. 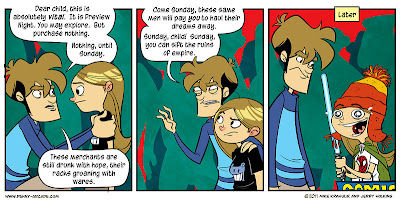 What?? Somehow, friday sales were pretty good! There was talk about the con being bigger this year! Obviously this increase will follow throughout my preconceived pattern, resulting in a bajillion sales on saturday! Right? Right? Oh, I'll have to look forward to that...!

At any rate, the first order of business for me is always to take my 2 given VCON bucks over to Kyle at his bc chains table. Aside from his custom made chain maille stuff, he also always brings candy. Eeeeeheeheee candy! A couple years he brought some that came in little round tins that make great rpg dice containers.

Not this year though... not that I don't have enough from previous years. For that matter, I also had my own little stock of candy. I was ripping off Kyle's tactic a little this year, putting a little box of candy out, for a buck a pop, or my own chomping. My offering was smaller, I didn't want to try to take over the VCON candy industry.. yet. But getting candy from Kyle has become my own custom, every since the year I had my table across from his. Candy. 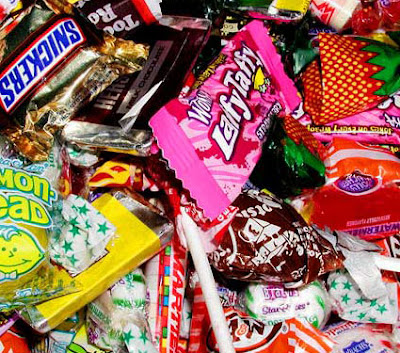 I think it was friday that Plotbunny showed up. She had emailed me a week or two previously. She's read all 3 of my books, and her favourite was the first. She had bought 2 copies of the paperback for Lifehack over the years, (as well as nabbing a poster or two) and she wanted hardcover now. She wanted hardcover last year, but I hadn't brought hardcover to VCON for a long time. They're pricey, both for me, and the end reader. Aside from hardcover fans, they just don't move that well. Not well enough for me to sit on a stack for potentially years.

But.... Plotbunny's an awesome gal, and obviously a fan of Regan's, so who am I to say no? At that point, I wasn't sure of the time to get an order, and for that matter, getting a single book would make the shipping really.. lame. I order in batches so the shipping per book is negligible. I didn't need a big batch of hardcovers. So... I brought my own personal trio of hardcovers.

Plotbunny came and went, taking my very own hardcover copy of Lifehack with her. The Watching Yute and Echoes of Erebus hardcovers cried. For the rest of the con, I had a post-it nearby saying "Hardcover Lifehack sold out!" ...... cuz I had so many to begin with. It would be obvious to anyone else that there'd been such a HUGE RUSH for them. Or, as most people mistook, poking the softcover that the post it was on, "You don't look sold out!" Look closer, that's a soft cover. "...Oh. Oh, right."

So now, a week later, my trio of hardcovers on my shelf has a gap. A continuity limp. I guess I'll have to restock myself.

All in all, as I said before, business was decent. For a friday? Amazing. And of course I was having a blast, yapping with vendors and visitors alike, basking in the nerdiness. For such a big circle of people, the citizenship of VCON feels very close. Similar interests will do that, I suppose.

As the hour drew near; 7pm, closing of the room for the day, I readied myself for the 'book launch' event. I had a reading to do! First, check that the posters on the wall were secure.. the masking take looped on te backs were doing OKAY, but I was certain I'd find at least one on the floor next morning. I laid down the books that were on stands, and weighted down things that might get caught in the breeze. Oh, and I tucked in the robot. 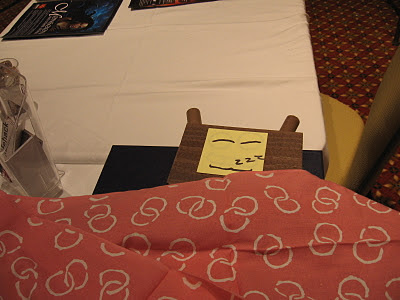 Next post- The Launch Reading!
Posted by Joseph Picard at 8:53 AM 2 comments:

So, my body's had some issues. Lesson learned. I neglected proper maintenance in years before, but this year it was systematic and deliberate. Hey! I had to optimize my time! 3 days in the realm of nerdiness must be properly utilized!

So here we go-

Mid morning Friday found me riding 'cargo class' in the back of my dad's van. My wife couldn't play taxi, due to motherly duties. A lot of vehicles just can't properly transport a paraplegic and his wheelchair, so certain compromises had to be made in my dad's van. Add my 3 boxes, big tupperware locker and two poster tubes... oh hey! I still had a lot of free space. The Big Black Box seemed appreciative too. 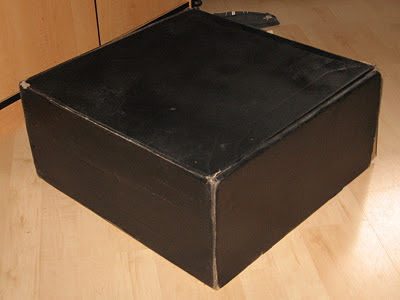 This fella has been with me during 3 or 4 VCONs, and his age is beginning to show. This is only my 4th VCON, so it's a minor tradition of sorts. He only comes out for VCON. He is the home of my spiked shoulder pads. 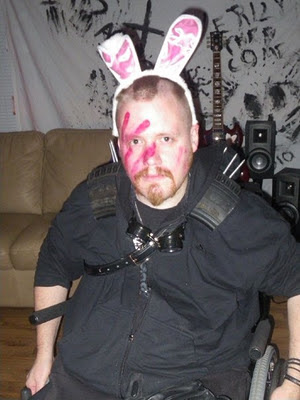 The ears, facepaint, and belt do not live in the box. Only the shoulder pads and the goggles are VCON regulars. This pic was a halloween costume once. I brought the shoulder pads to VCON, because.. well.. may as well bring something unusual to face the cosplayers.. not that this costume is of anything in particular, but the shoulder pads were a bit of a hit, so the next year, I packed em along. I didn't know if I should wear them.. two years in a row? My doubts were answered the moment I put The Big Black Box on my vendor table. Someone at a neighboring table asked "Ooh, did you bring the spikes?"

From that moment, they became part of my VCON tradition. They need a name. How about "The Pauldrons of Ozero"... cheesy? They're uncomfortable for me, as they grind against the shoulders when I wheel around, so I only wear them for 20 minutes or so at a time. They have some structural issues that are less than user-friendly.

Finally rolling into the Sheraton, we saw an Ecto-1 parking as well. Ghostbusters in da house. Seems they're part of a huge network of GB cosplayers, who do some kind of charity work, much like the 501st. (Star war imperial troops, also appearing at VCON again.) Still looking for those droids? 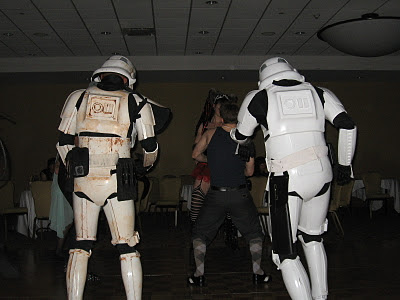 Anyway, while my dad sought one of those hotel luggage carts for my cargo, I did some recon for the vendor's room, and my table in it.

No sooner had I rolled into the room, than Steve Fahnestalk (who also was the con's official toastmaster) ambushed me.

Last year, Steve and I had tables across the aisle from each other, which led to a vicious rivalry in the 'giving-away-free-bookmarks' arena. Since then, he bought my first book, later giving me his, (I've reviewed it now,) while I tossed my other two at him. This day, he was evening the score, sticking me with his newest. More reviewing all 'round is imminent.

Once my dad and I got my haul to the table, he had to split. He apologized for not helping me set up, but that was fine by me. This was my table for 3 days, and setting it up was a pleasure. Well... except for the 3 posters I wanted to put up on the wall behind me. Thankfully, my neighbor helped me out. The wall was covered in a fabric, which isn't a good friend to tape. I should have just used tacks or something.

Time to plug my neighbor. Dang it if I can remember her name now (sorry! I suck at names!) but she's the writer attached to The Sword of the Stars II. They weren't there for anything much but creating a little buzz about the upcoming game, and to GIVE AWAY copies of the first game, along with all its expansions! I got a copy, but haven't had any time to really get into it though. Short description: Pick a race, take over space. Turn based ship movement, followed by realtime combat.

I was giving away... bookmarks, and big postcard with Regan on em. (This image was also one of the big posters behind me)

But I would be giving free games before VCON was over...

Aside from my books and associated banners and posters, I also set upon The Big Black Box- the robot. Ph34r the robot. 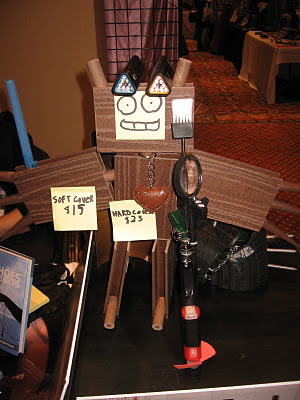